Life Before The War

On the 1901 census Victor was living at 100 Bevois Street, Southampton. Also living there was his father Frank who was a Dock Labourer, mother Jessie, 2 sisters May and Rose and 2 brothers Frank and Albert, also living with them was William Snellgrove, registered as a boarder and also working as a Dock Labourer.

In the census of 1911 his father Frank was registered as a Dock Labourer, Frank and Albert were Labourers and May was a mother’s help.  They were living at 58 Melbourne Street, Southampton in 6 rooms.
Military Service
Victor volunteered for the Mercantile Marine Service in August 1914 as a Doctor’s Boy.  He served on the Asturias (Belfast) until it was torpedoed on 21st March 1917.

His death was noted in the Mercantile Marine memorial as follows “ Orman, Doctor’s Bo,y Victor Charles Mafeking Orman, Asturias (Belfast) killed as a result of an attack by an enemy submarine, or killed by a mine, 21st March 1917 aged 18. Son of Frank and Jessie Matilda Orman of 3 Laundry Road, Shirley Warren, Southampton.”

The Asturias was a Royal Mail Steam Packet vessel on the Southampton to Argentina route.  During World War One she became a hospital ship bringing the British wounded soldiers back from France and other Mediterranean theatres of war.

On Tuesday 20th March 1917 HMHS Asturias docked at Avonmouth.  After the patients had disembarked she was making her way back to her home port of Southampton where most of her crew lived, via Cornwall.  Five miles off Start Point, around midnight, the U20 submarine fired two torpedoes – first hitting the rudder and exploding in the engine room.  The ship was abandoned with  82 of the crew being killed in the explosion while others were drowned when two lifeboats smashed together while being launched.

Survivors were taken to Devon.  The Asturias was beached at Salcombe and later towed to Portsmouth.

The National Roll of the Great War reports that Victor drowned on Tuesday 20th March 1917, although it is generally reported that the torpedo strike was after midnight and in the early hours of Wednesday 21st March 1917.  His death was registered at Newton Abbot. 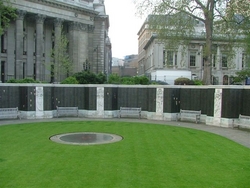 He is interred in grave 54, sector A160 at Southampton Old Cemetery and also commemorated on the Tower Hill Memorial.