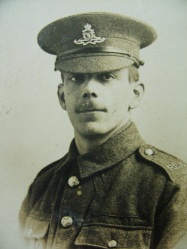 Life before the War
Sidney Thomas was born in 1886 to Tom Bungey and Bessie Bungey, nee Lamport, who married in Romsey on 25th May 1885.  Tom Bungey was a printer working for the stationers Cox & Sharland in Southampton.  Bessie died in 1892 aged just 30 years old.  Tom Bungey remarried 1893 to Mary Ann Brading from Kensington, London, and on 26 March 1896 George Henry Bungey, half-brother to Sidney Thomas, was born. The four of them were living at 26 Middle Street, Bevois Town.  George Henry was also destined to join the RGA in the Great War, serving with 11th Mountain Battery and 113th Heavy Battery.

Sidney Thomas attended the Southampton School of Art before joining his father at Cox & Sharland as a Ticket & Sign Writer.

Shortly after the creation of the Territorial Force in 1908 Sidney Thomas joined No.7 Company of the Hants RGA based at the Drill Hall, St. Mary’s Street, Southampton.  This was a part-time volunteer force which involved two week summer camps in August of each year at locations such as Oakhampton or Cliff End, I.o.W.  The photograph (below) shows No.7 Company in dress uniform.  These would almost all be Southampton men, some would have already served in the Africa Wars and others would soon be fighting in the Great War.  This photo was taken at Cliff End in August 1909.  Sidney Thomas is seated on the very left of the second row (up) wearing a single stripe indicating the rank of Bombardier (equivalent to Lance Corporal in the infantry) or acting Bombardier as they also had one stripe. 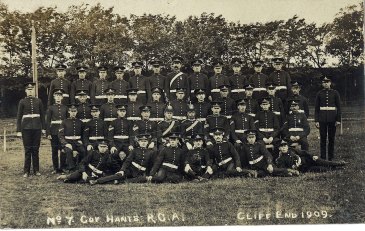 After the April 1911 census and before the birth of their only child Sydney John, on 16th July 1912, they had moved to Leeds, now living at 21 Livingstone Terrace, Roundhay.  The date of leaving Southampton probably coincided with his completion of four years service with the colours in the Hants RGA TF.

Once Sidney Thomas had joined the Army his wife and son moved back to Southampton to live with her father-in-law at 9 Castle Street.  After her husband’s death Ada Amelia Bungey moved to 141 Romsey Road, Shirley, Southampton.

Service in the Great War
Although Sidney Thomas’ service records no longer exist at the National Archive we are fortunate to have his personal pocket diary.  This, read alongside other historical documents, has provided a great deal about his activities in France.

As a trained gunner Sidney Thomas was part of the RGA Special Reserve as confirmed by his service number SR/8101, a series of numbers used for time-expired soldiers.

His diary gives an enlistment date of 4th April 1916, which also happens to be his 30th birthday, and by the 7th April 1916 had reported to No.4 Depot RGA at Great Yarmouth.  His enlistment predates those married men of the same age that would have attested under the ‘Group’ or ‘Derby’ scheme and had deferred their mobilisation, and also those married men conscripted under the Military Service Act 1916.

The photograph of Sidney, above, was taken before he was sent overseas.  The back of the photo is marked ‘Dinsdale Studios, 157 King Street, Great Yarmouth’ so we know this can be fairly accurately dated to April 1916.  Arthur Dinsdale was a photographer who owned the studio and there were many studios in King Street at that time.

He left Great Yarmouth for overseas on 6th May 1916, passing through Woolwich and Fort Elson near Gosport, leaving Southampton Docks on the night of 18th May 1916 and arriving in Le Harve the next morning.  After two days at No.1 General Base Depot RGA he boarded a train to join up with his Battery at Meaulte, travelling via Rouen and the railhead at Heilly.  The Battery consisted of four 60 pounder guns firing 5” shells.

Sidney Thomas’ Battery was involved in all the major battles that formed the Great Push campaign on the Somme between July and November 1916.  For the artillery, the Great Push was to start on 24th June 1916 with 7 days of heavy bombardment in which the four gun battery would fire about 1000 rounds each day leading up to the start of the infantry advance on the 1st July.

During the Battle of the Somme, as the front line advanced eastwards, the Battery passed through Mametz, Montauban, Longueval, Deville Wood, High Wood and Ginchy.

Two weeks were spent at rest camp in January 1917 after which the Battery moved to another part of the line and were involved in following up the German retreat to the Hindenburg Line in the spring of 1917, passing through Folies, Rouvroy, Foreste, Germanine and Savy coming to a halt near Holnon, just outside St. Quentin.  It was at this location on 12th April 1917 where Sidney Thomas Bungey was killed in action with two of his comrades, Gunners Kent and Gurr, when a German shell fell among the relief gun detachments as they were going out to the guns.  This incident was described in letter to his wife written by the Officer Commanding 125 Heavy Battery, Acting Major John Tom Noble.  The three Gunners are buried at the Chapelle British Cemetery, Holnon.

If you have any additional information about the person named above, or about the soldiers from No. 7 Company, please complete the Comments section below.