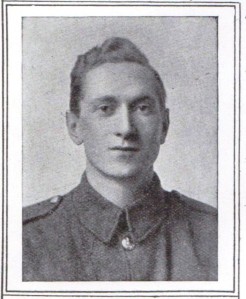 Life before the War
Reginald was the eldest of 2 sons born to parents Albert Townsend/Thomas, born in Reading in 1859, and Emily Frances, born in Southampton 1863.  Albert’s occupation was Surveyors Clerk at the General Post Office.

Augustus was born in 1853 and died in 1914 leaving a Probate naming his wife:

Harold Francis (Stapley), born in 1891 and died in 1965.  Married Bertha Catherine Groom on 3rd June 1916 at the Parish Church in Paddington, London, after their Banns were read.  Harold was a bachelor whose profession was Qualified Chemist.  Bertha was a spinster, who was 23 years old at the time of her marriage.  (Taken from Parish Records).

The 1891 census shows that the family was in a position financially to be able to employ a General Domestic Servant.

By the 1901 census Reginald’s mother and her second husband, who was “living on his own means”, were living at 11 Cranbury Avenue, Southampton.  Reginald was a patient in the Isolation Hospital.  This hospital was built in 1900 in what was then Mousehole Lane and now known as Oakley Road, Millbrook, Southampton.  It eventually became the Chest Hospital and now well known as the Western Community Hospital.

In 1911 Augustus, Emily and Stanley were living at 9 Howard Road, Shirley, where Augustus recorded that he was a retired Silk Merchant.  Harold had moved to Illfracombe, Devon, living with the Moon family and employed as a Chemist’s Assistant.  William James Moon owned a Chemist’s Shop.  No trace can be found for Reginald in the census for this year.

Reginald married Rose Hemstalk in 1915 in Worksop, Nottinghamshire.  Rose was born in 1888 in Worksop district.  Their daughter Minette T was born the following year.  Rose didn’t marry again and died in 1966 in Worksop.

Reginald attended Taunton’s School in Southampton and he is remembered in their register:

Education and Employment: Albert was born on 28th October 1888 in Reading. He was sometimes known by his middle name, Reginald. He attended Miss Thompson’s School before joining Taunton’s School.

Life during the war: Albert’s father died and his mother remarried in 1899. By 1911 Albert’s mother and stepfather were resident on Howard Road in Shirley. Albert was in Worksop by 1915, when he married Rose Hemstalk, and they lived on Carlton Road there. He enlisted in the Honourable Artillery Company and served with “D” Company of the 1st Battalion. He died of his wounds and was buried in the Pas de Calais at Duisans British Cemetery.

Reginald is Remembered with Honour at the Duisans British Cemetery, Etrun, France. His wife, had the words “Until the Dawn” inscribed on his headstone The register reads:

Nottinghamshire County Council
As Pte Stapley was living in Worksop at the time of his death, they have also Remembered him with Honour:

Family History
Reginald T Stapley was born and Registered as Albert Reginald T(ownend) Stapley at Reading, Berkshire in 1888. His parents were Albert Thomas Stapley (a surveyor’s clerk) and Emily Frances Paul who had married the previous year in Southampton. He had a brother, Harold born in 1891 in Reading at 1 Argyle Street. The family may have moved to the Isle of Wight as in 1895, Albert Thomas Stapley died there age 36. His widow was soon to re-marry which she did in 1899 at Southampton to Augustus Sharland. By 1901, Emily had a child with her new husband called Stanley and whilst they were living at 11 Cranbury Ave, Southampton, Reginald is recorded as a 12 year old patient in the Isolation hospital, Mousehole Lane, Shirley, Hants for reasons unknown. Whatever the illness, he came out alright as in 1911 he was resident in Worksop, Notts. In 1915, recorded as Albert R T Stapley, he married Rose Hemstalk, in Worksop and in 1916 they had a daughter, Ninnette T Stapley.

Military History
Pte Reginald T Stapley, Worksop Guardian, 11 May 1917. Another Worksop soldier to make the great sacrifice is Pte Reginald T Stapley of the 1st Battalion Honourable Artillery Company, whose death in France has been reported this week. Pte Stapley was in the Worksop and Retford Brewery Company for about six years, at the Prior Well Brewery, as second brewer, coming from Southampton, where his widowed mother still resides. He joined the Army in November 1915, and after training at Wimbledon and other places, he was drafted to France about nine months ago. He was 28 years of age and leaves a widow and one child. Pte Stapley made many friends during his residence in Worksop.

Journal of the Institute of Brewing – Roll of Honour
The Council regrets to record the deaths, on active service, of the following Members:—

For his service to his country, he was entitled to the British War and Victory Medals.