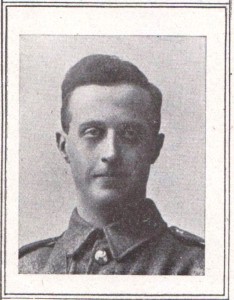 Life before the War
Percy’s father, Ephraim Charles, was born in 1877, Tillbury, Essex.  He passed away in1944 leaving a Probate, naming his second wife, son and daughter:

Percy’s mother was Caroline Jane, nee Serpell, was born in 1872 Sheviock, Cornwall and died in 1924.  His parents married in 1898 in the district of West Ham, Essex.

Percy, with his parents, lived at Bellevue Road, Wivenhoe, Essex as documented on the 1901 census return. His father was a Master Mariner of the Seas.

All the siblings were living with their mother at the same address as in 1901.  Their father was living aboard the S. Y. Abona as a Master Mariner Crew Member; the ship was docked at Fays Yard, Northam, Southampton.

Education and Employment: Percy was born in Forest Gate and his early education took place in Wivenhoe, Essex. His family moved to Southampton in 1911 where Percy joined Taunton’s Trade School.  He won prizes for Design, Art and Attendance.

Life during the war: Percy continued to support the football team after he left and frequently attended matches with other Old Boys.  Percy enlisted in Southampton and served with the Royal Fusiliers.  He was later attached to the 2nd Battalion of the London Regiment.  He died during the Allies’ recapturing of Marincourt from the German army in August 1918.

Percy is Remembered with Honour at the Peronne Road Cemetery, Marincourt, France. He has a headstone with his name with a central cross.  Their memorial register reads:

For his service to his country, Percy was entitled to the British War and Victory Medals.