Life Before the War.
James was born in March 1880 in Sholing Southampton, his parents were Philip and Mary. Mary was born in 1856 at Corfe Castle in Dorset his father was born in 1855 in Fordingbridge. Hampshire they were married in October 1910 in South Stoneham Southampton.

In the 1881 census James and brother Philip were living with his parents at 94 Church Road.Sholing Cottages. Southampton, his father was a bricklayer.

In the census of 1891 James was living with his family at 15 Ashley Road, his father was working as a bricklayer, his brother Philip  was an errand boy.

James married  Beatrice H Cooper in October 1910 they had one son Cecil  who was born in Woolston. Southampton.

In the 1911 census James was working as a builders labourer, they lived at 54 Mortimers Road.Itchen.Southampton.

On his death his wife Beatrice was living at 18 Northam Street.Southampton.

James enlisted as a Private in Southampton on 10th September 1914 and  joined the 3rd Battalion Rifle Brigade, during his short service he rose to the rank  of Lance Corporal, After enlisting he proceeded to France on the 12th of September 1914 landing at St Nazaire,immediately marching across France to the First Battle of Aisne to reinforce the  BEF and then to Ypres, by December many regiments including the Rifle Brigade were now holding a continuous sector of the Western Front from  south of St Eloi, round past Armentières to Neuve Chapelle, past Festubert and to the La Bassée Canal at Givenchy.

In the middle of December an attack of ” The German Birdcage”east of Ploegsteert Woods by various brigades including the Rifle Brigade  failed with many casualties, gradually a “local truce” began with the Germans helping with the  British wounded from No Man’s Land, by the 23rd December 1914 singing of hymns  could be heard from the trenches on both sides.  By Christmas Eve there was a hard frost making trench conditions a little more bearable for the men and it was during the afternoon and early evening the British saw German troops  with Christmas trees, placing them on the parapets of the fire trenches.Christmas trees with candles and paper lanterns on enemy lines, singing of carols, hymns and songs was heard and gradually an exchange of communication and reportedly men meeting each other to arrange the collection of the bodies of their men.

In other places the firing continued making it difficult for the officers to know how to react.

As the enemy were very close to the BEF it  meant that they could be heard speaking, and even their  cooking could be smelled which meant a number of men became curious about the men they were facing. as they realised they were  facing the same conditions of wet and cold,  it is recorded,  a strange  mutual respect developed.

On Christmas Day the fraternisation among the men continued, many bodies that had been lying on No Mans Lands were buried some in joint burials. Events were recorded by men, of soldiers exchanging tokens or addresses with German soldiers, Christmas dinners were taken into barns or partly demolished buildings. As night fell the men fell back into their trenches
once again.

By Boxing Day however men on both sides began to get back to their normal trench caution. News of the truce began to get back to the Higher Command who asked for particulars of units and officers who took part with a view to disciplinary action, although after thought no action was taken.   The friendly mood remained in some areas until New Years Day and there was almost no firing among the men although open fraternisation died away,

On New Years Day although there was some singing and exchanges of messages no truce was held again.

The Rifle Brigade is recorded as taking part  in this truce area and it is  possible James was witness to these events, he was killed in action  on 9th April 1915  and is remembered on the Ploegsteert Memorial Panel 10. He was entitled to  Victory Medal, British Medal and the  14th Star. 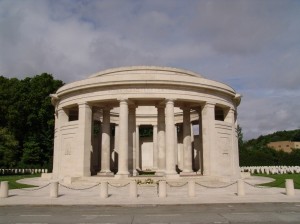 James is remembered on Panel 10