Catherine  b.1904 in Salisbury, Hampshire

In the 1901 census Henry was living with his parents and sister Edith in Liss, Hampshire.  Arthur’s occupation is given as a Dealer in Meat and Poultry.

By the 1911 census the family had grown and Henry was living with his parents and all three siblings at 4 Polygon Villas, Polygon, Southampton.

At the time of Henry’s death his parents were still living at 11 Kings Park Road, Southampton.

When Henry’s mother died in 1946 she left probate to her daughter Catherine Richardson.

Henry joined the Kings Rifles in 1915, initially serving in the 4th Battalion Kings Royal Rifles. He then joined the 18th Battalion and fought in France until he was wounded.  Henry died of his wounds in June 1919 at his parents’ home.

He was awarded the Victory and British War Medals. 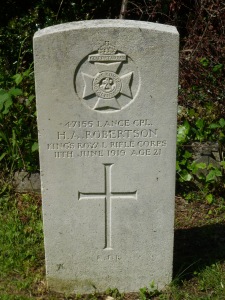