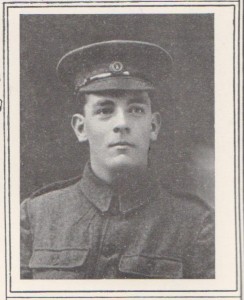 Harold was the eldest of two siblings born to Frederick and Evelyn Isabella, nee Keffen.  Both parents were born in Southampton, Frederick in 1868 and Evelyn in 1873, and they married in the city in 1894.  Frederick was a Master Baker and they lived at 39 Wellington Road, Shirley.

Both parents made at least three return trips to South Africa, but home was in Southampton, where Fredrick held the post of Mayor in 1921.

Frederick passed away in Southampton in 1955 aged 87 years, the couple living at 114 Paynes Road, Shirley at the time.

Harold’s sister, Doris Eva, was born in 1897.  She married Lars Albert Norenius in South Africa in 1922 and the couple settled in Dundee, South Africa.

Evelyn moved to South Africa after the death of her husband, and lived with her daughter’s family until her death on 27th August 1960, aged 87 years.

Doris and her husband both died in South Africa in 1974.

Harold is shown as enlisting in Canterbury but this is difficult to ratify.  The Battalion was based in Newport, South Wales on 4th August 1914, before moving to the Isle of Wight later that year.

The 1/8th joined the 163rd (Norfolk & Suffolk) Brigade of the 54th (East Anglian) Division and moved to Bury St. Edmunds, before quickly relocating in Watford.

The Division was mobilised for war in July 1915 and embarked on the Aquitania in Liverpool on 30 July, bound for Gallipoli.  They landed at Surla Bay on 9 August and the 163rd Brigade were immediately involved in an attack on Turkish positions on Anafurta Ridge. This action was poorly planned and many men were lost.

Harold lost his life during the Second Battle of Gaza, which left the Turks in charge of the town.

The ruined and deserted city was finally “captured” by the Allied forces on 7 November 1917.

Life during the War:  Harold was born in Southampton and lived in the Shirley / Freemantle part of the town until he joined the army.  His father was a Master Baker, but also a Councillor and later Mayor of Southampton.  Harold served as a rifleman in the 1st / 8th battalion of the Hampshire regiment.  He died during the battle of Gaza.