Life before the War
George Philip Le Feuvre was born in St Helier, Jersey in 1878 to Philip John, born in the Channel Islands, and Mary born in 1855 in England.

On the 1891 census return all three siblings are shown living at different addresses; there is no record of their parents.  George was a ‘boarder’ with John and Julia Cavey at Wesley Cottage, St Saviour; Eliza was with her aunt and uncle, John and Isabel Burman, at 34 Bath Road, St Helier; John was also a ‘boarder’ with a Louisa Bisson aged 56, at 16 George Street, St Helier.

George and Mary Louise are shown on the 1911 census as living at 30 Carlton Place, The Bedford Mews, Southampton.  George is an ‘Assistant Store Keeper R M S Pk Company’; no children are listed. 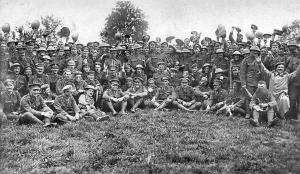 Men of the Wiltshire Regiment after Thiepval, courtesy of the Roll of Honour website.

George served as a Private with the 6th Battalion of the Duke of Edinburgh’s (Wiltshire) Regiment.  He was killed in action on the Western Front in France on 21st January 1917.

The 6th (Service) Battalion was formed at Devizes in September 1914 as part of K2 and attached as Army Troops to 19th (Western) Division. They then moved to Salisbury Plain, and in December 1914 moved to billets in Basingstoke, joining 58th Brigade in the same Division. The Battalion transferred to Perham Down in March, from there they sailed and landed in France in July 1915.

George is buried in the Commonwealth War Graves, Sailly-Au-Bois Military Cemetery; the village is between Arras and Amiens, about 18 miles south of Arras in the Pas-de-Calais Department.  His headstone is engraved with a cross and reads ‘In God’s Own Keeping’.

His widow was living at 8 Gascoigne Terrace, Swaythling, Southampton.  Mary Louise lived to the age of 81, dying in Southampton in December 1949.

George was entitled to the Victory Medal and the British War Medal.