Life Before The War
Frank was born in 1887 in Hackney London his parents were Ebenezer John and Sarah Ann.

In the census of 1881 Frank’s father was a Fish Salesman and lodging in Tower Hamlets.

By the time of the 1891 census the family were living at  57 Lockhurst Street, Hackney, London in 4 rooms.  Ebenezer’s mother, Jane Mears, a widow aged 74, was living with them and is recorded as a ‘lodger’ living on her own means.  Ebenezer was working as a Mercantile Clerk,

The census of 1901 shows Frank living at 84 Clarence Road, Hackney.  His mother Sarah is now a widow, Constance was working as a Commercial Clerk and Frank was a Junior Shipping Clerk.  They were living in three rooms.

Military Service
Frank joined the Mercantile Marines and served as a chief steward on H.M.S. Armandale Castle, a passenger steamship built in 1903 in Govan, Scotland.  She was requisitioned by the Royal Navy as an armed mercantile cruiser on 2nd August 1914.  She was returned to commercial service in 1919 and laid up at Netley in 1935, reprieved for one voyage and scrapped in 1936 at Blythe by Hugh Bulckow Limited. 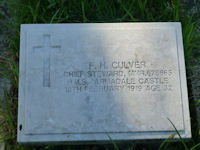 Probate  of  £165 was given to his wife on 26th May 1919.  Her address was given as Bashley Lodge, Clifton Road, Regents Park, Southampton.