Military Service
The military record of Filmer Chiswell has not survived. We know from his medal index card that in WW1 he served as a gunner in the 7th RE unit Royal Field Artillery (service number:77260) having enlisted on 20th August 1914.

His medal index card says he was awarded the Victory medal, the British medal and 1914 Star medal in recognition of his services to his country. However the index card has also says he was “deleted from 1914-15 Star Roll”. That could indicate that he was first assumed to have been with the main body of the battalion but it was later discovered that he was not. The actual reason for his removal is not known. Filmer Chiswell is inscribed on the cenotaph at Southampton “lest we forget” and is commemorated at the Longuenesse (St. Omer) Souvenir Cemetery, Pas de Calais, France with 3177 other soldiers.  He is also memorialised on his family’s grave at Southampton Old Cemetery: 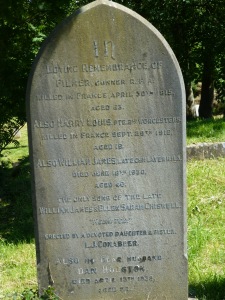 The 1914 bronze Star campaign medal of the British Empire was authorized by King George V in April 1917 for those who had served in France or Belgium between 5th August 1914 to midnight on 22nd November 1914. The recipients were responsible for assisting the French to hold back the German army while new recruits could be trained and equipped. Collectively, they fully deserve a great deal of honour for their part in the first sixteen weeks of the Great War. Also known as the Mons Star. This medal was sometimes irreverently referred to as ‘Pip’.

The silver British War Medal was awarded for service in World War One. Also called the British Empire campaign medal, it was sometimes irreverently referred to as ‘Squeak’.

The bronze Victory medal, also called the Inter Allied Victory Medal was awarded to those who received the British War Medal. This medal was sometimes irreverently referred to as ‘Wilfred’.

Life before the war
Filmer Chiswell was born the second son to William James Chiswell general labourer (1854-1924) and Ellen Sarah nee Chandler (1857-1917) who had married in 1878.
They had a total of seven children but by 1911 one had died in infancy.
The following children of William James and Ellen Sarah Chiswell are confirmed from parish records:

Researched by DHW – April 2013.
If you have any more information about the above named person, or any other name listed on this website or Southampton’s Cenotaph, please email Southampton.cenotaph@hotmail.co.uk, or telephone 023 8086 9599 and we will contact you.  Many thanks.