Life before the War
Donald’s father, Walter Comfield Green, was born in Saffron Walden, Essex in 1865 and died in 1941 in the district of Winchester.  His mother Eliza Florrie, aka Florence Eliza, nee Wood, came from Guildford, Surrey, where she was born 1872.  Walter and Eliza married in 1890.  Donald was the younger of two children.  He had a brother:

The family lived at 54 Park Street, Freemantle, Southampton.  Walter was a Carriage and Motor Finisher employed in the Coach Trade, Eliza was working in a General Draper ‘s as a Manager.  Roy was engaged by Timber Merchants as  a Timber Importer Apprentice, whilst Donald was an Apprentice Seedsman. The family had a Domestic Servant working for them.

Education and Employment: Donald was born on 28th June 1894 in Southampton, into a Quaker family. After leaving school he worked as a seedsman’s apprentice.

Life during the war: Donald enlisted in Southampton and initially joined the Hampshire Regiment. He became an Acting Corporal in the 5th Battalion of the Dorsetshire Regiment. Donald was killed in action in France – he had only been in the firing line for a day or two when he succumbed to his wounds. He is remembered on the Thiepval Memorial. 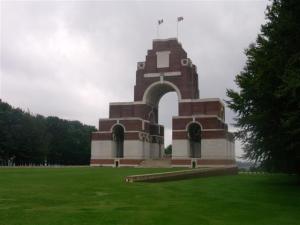 For his service to his country, Donald was entitled to the British War and Victory Medals.