Life Before the War.

The census of 1901 shows Walter living at 152 Old Kent Road.Southwark and working as a servant, boot boy for a family where the head   was a Pawnbroker’s Manager.

In the census of 1911 his father Walter was working as a Carman carrying goods,Annie was not  working, the family were living at 19 Pound Street. Shirley.Southampton
in 5 rooms with Charles,Mable and Nellie.

Also registered on a separate census sheet by the same enumerator for 19 Pound Street.Shirley.Southampton in the 1911  census was Annie’s mother Elisabeth (a widow by this time) registered as the head of the house, along with Annie’s brothers Frank who was aged 19  working as a porter  for a house furnisher and  Ernest aged 15 who was unemployed.

In June 1934 Charles married Kathleen  Mitchell who was born in December 1909  in Southampton. They had 1 son Michael born 23  June 1937 who married Christine Thompson in June 1963.

Walter’s brother William was living at 48 Cannon  Street.Shirley, by 1948  Williams wife was registered at 48 Cannon Street.

Walter Heather was  a survivor of the British Expeditionary Force of 1914, he was always proud to walk with the “Old Contemptibles” in Southampton’s  Remembrance Day parades. 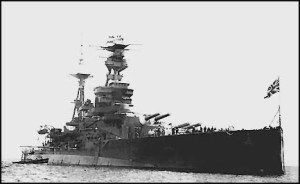 Charles started his service with  the Royal Navy before the Second World War and  applied to join the submarine service, but had his application  rejected. He then served on HMS London a Heavy Cruiser, before  being transferred to HMS Royal Oak a Royal Sovereign Class Battleship, he served as an able seaman.

At 1.23 three more torpedoes were fired, the 3rd hit  her starboard side and caused a magazine to explode, HMS Royal Oak rolled over and sank in 19 minutes. 833 lives were lost (including 100 boy sailors) and Charles Walter Heather,only 375 survived.

On the 8th November 2013 divers from the Royal Navy went to the wreck of the Royal Oak to replace the White Ensign on her in time for Remembrance Day.

Every year, around  Remembrance Day in a show of respect, a team from the Northern Diving Group of the Royal Navy based in Faslane return to the Orkneys to inspect the Royal Oak and place the Royal Navy’s standard on her.

Researched by Brenda White March 2014 with some information  and the photograph of Charles provided by his son Michael Heather.

Permission should be requested from Michael Heather before copying  the photograph.
We thank him for verifying the story and his interest in our work and give him our appreciation.