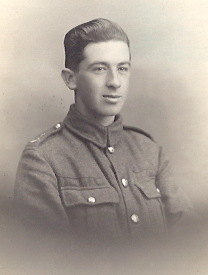 The enlistment and service documents for Bertie Sonley have not survived.  In WW1 he served as a Lance Corporal in the Hampshire Regiment (service number: 29574).

He entered a theatre of war with 2nd Battalion, Hampshire Regiment at some point after the beginning of 1916.  The 2nd battalion had transferred to the Western Front from Gallipoli in March 1916.  They served on the Somme, in the Ypres Salient and Arras, Cambrai, Lys and the advance on the Rhine.

‘A quiet day on the whole. battalion HQ at MUIR LODGE was shelled for two hours with 8 inch, 5.9 inch and 4.2 inch howitzers. No direct hit was obtained but hits were registered all round and the pill box was made to rock.  At 10.55pm, just as we were being relieved by the 1st Royal Newfoundland Regiment, the enemy dropped a light barrage behind our front and support lines and there was some gas shelling round battalion headquarters resulting in 4 casualties sick to hospital.’

According to the Commonwealth War Graves Commission Private Sonley was serving with HQ Company when he died.  The incident on this day (March 26th 1918) seems to fit in with the other evidence.

According to The Hampshire Regimental Journal of June 1918 Pte B Sonley is at home ‘sick’ at the War General Hospital, Manchester. It is likely that he would have been sent to any hospital that would take him, they would not necessarily be sent to one near home. The Casualty Ledger states that he was ‘shell gassed’ and arrived at the hospital on 4th April 1918.

He was posthumously awarded the Victory medal and the British War medal in recognition of his services to his country and is inscribed on the cenotaph at Southampton “lest we forget”.

The silver British War Medal was awarded for service in World War One.  Also called the British Empire campaign medal, it was sometimes irreverently referred to as ‘Squeak’. The bronze Victory medal, also called the Inter Allied Victory Medal was awarded to those who received the British War Medal. This medal was sometimes irreverently referred to as ‘Wilfred’.

Life before the war

Bertie Sonley was born in the winter of 1873 in Southampton, (GRO registration q4 volume 2c page 34), the 10th child of Robert Sonley (born in 1841 in Yorkshire) and his second wife Emily Charlotte nee Monger (born 1871) whom had married on 16th June 1889. Their marriage was registered in Southampton volume 2c page 79.

Robert Sonley married his first wife Mary Ann Munday (born in 1841 Longstock Hampshire) in 1871.  They started their family immediately. The following 7children of Robert and Mary Ann are confirmed from parish records:

1. Robert William Charles Sonley was born on 18th December 1871. He died aged 17 months and was buried in Southampton Old Cemetery on 31st May 1873.

2. Robert and Mary had a still born child who was buried in Southampton Old Cemetery on 21st November 1872.

3. Ada Olive Sonley was born in 1875.  In 1911 she was employed as a servant to a widow in Southampton. Ada Sonley died aged 78 years and was buried in Southampton Holybrook Cemetery on 26th June 1953.

7. William Alfred Sonley was born in 1882.  He died aged 68 years and was buried in Southampton South Stoneham Cemetery on 10th January 1950.

Mary Ann Sonley died aged 47 on 30th September 1887.   She was buried in the family grave in Southampton Old Cemetery.  Widowed with half a dozen young children Robert Sonley married 17 year old Emily Lucy Moger ‘the girl next door’ at Southampton Registry office on 16th June 1889.  The residence at the time was 122 Bevois Street, Southampton.  On the marriage certificate Emily stated she was 20 years old!  The marriage was witnessed by Emily’s sister and Brother-in-law Thomas and Elizabeth Forbes nee Moger.

The following 7 children of Robert and Emily are confirmed from parish records:

11. Leslie Charles Sonley was born 26th December 1895.  He served in the war and recuperated in Manchester hospital.  In 1947 he married Olive (Strugnell nee Moore) whose previous marriage in 1922 to Frederick T Strugnell had been annulled.  Although Olive had two sons with Frederick the Sonleys had no children of their own.  Leslie died aged 74 in 1970.

12. Winifred Lena Marion Sonley was born 23rd March 1900.  She remained a spinster (her intent to marry a Catholic man was refused by her mother Emily).  Winifred died aged 88 in 1988.

14. Gordon John Hoole Sonley was born in 1906.  He never married and lived with his two older sisters Winifred and ‘Dora’ in Athelstan Road.  He died aged 76 and was cremated on 9th March 1983.  His ashes are interred in Southampton Old Cemetery.

Researched by DHW – 28th July 2013. With grateful thanks for family information and treasured photographs from Katherine Anteney.

If you have any more information about the above named person, or any other name listed on this website or Southampton’s Cenotaph, please email Southampton.cenotaph@hotmail.co.uk, or telephone 023 8086 9599 and we will contact you.  Many thanks.

One response to “Bertie H Sonley”