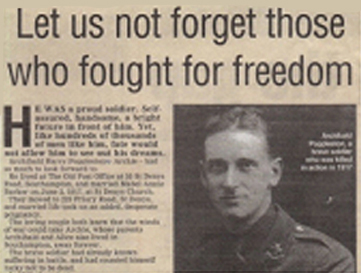 Archie was born in Southampton in the summer of 1894. At the time of the census in 1911, Archie and his family were living with his grandmother at 55 St Denys Road, Southampton.  He was 16 years of age and a bank clerk and had a younger brother Edward.  Their father, Archibald was a Mercantile Clerk and their mother Alice was assisting her widowed mother with the family business of sub-post office and drapery. Archibald is also shown on the census as a 17 year old bank clerk boarding at 18 Chetwynd Road, Southsea so it is possible he was working briefly in Southsea and recorded at both locations.

Archie enlisted in the Gloucestershire Regiment in 1914 and entered the war in France as a Private on 31st March 1915.  He was promoted to Corporal and was shot in the shoulder later that year. In 1916, he returned home to the military Royal Victoria Hospital at Netley to recover from being gassed during the fighting.

Archie was commissioned as Second Lieutenant on 31st July 1917 and he was posted to the 7th (Robin Hood) Battalion, Sherwood Foresters. He was killed in action on 6th December 1917 and is one of 20,000 Commonwealth soldiers with no known grave who are commemorated on the Loos Memorial. He was 24 years of age and had been married for six months. There is also a memorial to him at the Popplestone family grave in Southampton Old Cemetery.

Archie’s niece, Mary Dibben (nee Popplestone) has researched and compiled a book about his life. She remembers “Archie’s Room” at her grandmother’s house.

Archibald is commemorated on Southampton Cenotaph as Popplestone, Archibald