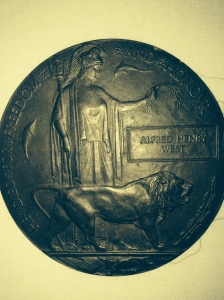 Alfred Henry West’s ‘Dead Man’s Penny’ – see note on this at the foot of the page.

Besides Marion, his half-sister, Alfred had 3 full siblings:

On the 1891 census Alfred is living with his parents, sisters Edith and Minnie and brother George at 15 Victoria Terrace, Dukes Road, Portswood, Southampton.  His father is employed as a dock labourer.  Alfred’s half- sister Marion Jessie is living with her aunt Fanny and uncle Thomas West at 97 Elizabeth Road, East Ham, Romford.  Thomas is the brother of Alfred’s father.

The 1901 census shows that Marion Jessie is still living with her aunt and uncle at the same address.  Alfred is now living at 17 Onslow Road, Woolston, Southampton – some of Southampton’s road names have been changed over the years and this is now Swift Road, Woolston.  His father is now a shipping clerk

By the 1911 census Alfred is living with his parents at 26 Church Road, Woolston, Southampton.

His sister Edith is living at the North Tidworth barracks with her husband (who is serving in Royal Army Medical Corps) and three children, Cyril, Minnie and Ivy.

His brother George is a Driver in the Royal Engineers (and served in WW1) and is living at 137 Northgate Street, Canterbury, Kent, with his wife and two children Elsie and Hilda.

Alfred’s sister Minnie is working as a parlour maid at Fugglestone Home, Salisbury.  Her employer is a Dental Surgeon.

War Service
Ernest’s name does not appear on the Cenotaph or Memorial Wall. We have contacted his family, who still live in Southampton, to ascertain the reasons for this and are awaiting their reply before further research is undertaken.  In the meantime we have uploaded Ernest’s story pending the inclusion of additional information.

Dead Man’s Penny – please select this link to read more about the Memorial Plaque awarded to the families of every British and Empire service personnel who were killed as a result of the First World War. The Dead Man’s Penny for Ernest has kindly been shared with SCF&FG by his family.  The SCF&FG have been showing this at schools and other events and many children and adults have expressed their surprise at its size and weight and, when touching it, have been humbled by its significance.